Worker organizing: Is there an app for that? EWOC thinks not

What Does This All Mean?

Essential workers are striking left and right. Workers are quitting en masse. The president is singing the praises of collective bargaining. And Amazon workers are rising up. The trend is clear: collective action in the workplace is making a comeback.

Now, the momentum has moved even the most unexpected to action: venture capitalists have started funding a number of tech startups designed to help workers form unions.

The promise? The apps can help you do anything from “improve one small issue” at work to “overhaul your workplace,” all while keeping your fingers right “on your smartphone.”

This is an encouraging sign in some ways. Investors are apparently betting that demand for unions will surge. And the potential for those new to the labor movement to learn the benefits of collective action through these apps is more than welcome.

But are capitalist enterprises the best source of help for forcing your boss to treat you better? We think you have better options—and they’re not ones that will leave you stranded in the 19th century, as these apps suggest.

If you’re thinking about getting help from or working for one of these startups, make sure you talk to one of our organizers or read on to learn why we think you’d be better served organizing with a group like EWOC.

Labor organizing requires having difficult conversations, discovering workers’ collective power, building solidarity in the workplace and in the surrounding community, and countering employer resistance. This takes the form of banding together to win demands or a contract, but also building longer-term political power.

Organizing software is already used by unions and worker organizations across the country to aid with many of these tasks—the fight for pay equity at Apple that grew out of discussions on the co-working app, Slack, is one of the  latest demonstrations of the potential for technology to help workers discover their shared concerns and mobilize to address them. This is not to mention much of the software built for and used by unions and political organizations across the country, such as Broadstripes or Action Builder.

But the process of uniting into a boss-fighting force cannot be automated, outsourced, or monetized—the typical mandates of tech startups. Doing so is likely to leave workers less prepared and more vulnerable.

If you’re looking for help organizing your workplace, tech-savvy worker organizations like EWOC and militant unions, such as United Electrical, Radio and Machine Workers of America, are still your best bet.

At EWOC, we’ve pioneered an organizing model that leverages technology and 21st century organizing tactics. Our organizers also bring decades of experience winning workplace campaigns, and a level of commitment and care to workers that only a volunteer-run, militant organization can provide. These are qualities that tech startups can’t match, regardless of how well-intentioned their founders might be.

This is for two simple reasons: Because serious labor organizing cannot be automated, and because what these apps are building—if they’re working at all—is not actual worker power.

Profit-making and social justice have never mixed well. When push comes to shove, businesses must prioritize profits. That is particularly true of Silicon Valley startups that are required to post returns for their investors—such as venture capitalists or private equity firms. These new labor-oriented startups, however good-hearted their founders might claim to be, fall into this group.

One of the latest bids by entrepreneurs to resist profit pressure from their investors is to incorporate their firms as so-called “benefit corporations.” Some of these labor startups have taken this tack, signaling the good intentions of their creators, while leaving the plans for execution opaque.

But this approach has serious limitations. Look no further than the no-holds-barred (and thankfully failed) union-busting campaign that was waged by Silicon Valley’s most high-profile “public benefit corporation”: Kickstarter. The Kickstarter workers won their union drive against anti-union management through tried-and-true tactics: hours on the phone with experienced labor organizers and their fellow workers, and careful strategizing that no app alone can provide.

Indeed, the most prominent organization that certifies firms with “public benefit” status—B Lab—has decided that union-busting evidently need not violate the “highest standards of verified social … performance.” Firms can bust unions and still retain their “public benefit” certification, as long as they state their opposition to unionization on a profile page. They only run the risk of losing their status if they are found to have violated labor law by the National Labor Relations Board and if a council—composed mostly of former corporate executives—decides that they have not “sufficiently remediated” any violations.

B Lab has also allegedly certified tax-dodging firms, for-profit education companies, and corporations working in the prison industry. This is not to say that all “benefit corporations” are disingenuous, only that many of them have failed to live up to their social missions. Why does this happen? Because CEOs, as a rule, do not want to share power with rank-and-file workers, and because businesses are always subject to pressure from both shareholders and market competition to put profits over people.

Labor organizing is very different from the sort of services that startups typically seek to streamline and monetize. Coming together with your co-workers to win better treatment is a difficult and often messy affair. This is not because it’s logistically cumbersome, but because employers don’t want workers to have power and often engage in illegal activity to keep it that way.

Workers win union campaigns not because they have a frictionless user experience with their organizing software. They win because of the skills, resources, and emotional bonds that they develop together. These allow them to face down intimidation tactics used by employers and to make sure that solidarity, not division, wins the day.

Such unity may arise organically in places where fighting unions already exist in the surrounding community. But for the most part, in the United States in 2021, it requires support, coaching, and training from union organizers with experience, themselves supported, coached, and trained by the same.

For a worker leader, talking to an EWOC volunteer who has no incentive other than to listen and to help the workers win can often make or break a worker’s campaign. This is part of why labor organizers warn that there are no shortcuts to winning a union campaign. Claims that a union campaign can be made easier largely through technical fixes should be treated with caution.

The result of winning a workplace campaign is extraordinary. The material benefits can be considerable. And you’d also be hard-pressed to find a more personally and politically transformative experience than winning dignity back from your boss with your co-workers. The intense, personal conversations needed to achieve this, however, cannot be automated without undermining their effectiveness.

Some of these labor startups, because of their tech-first orientation, are light on the organizing experience and instincts that can give a big boost to workers. They lack detailed knowledge of how to prepare workers for the many tactics that can deter workers from taking collective action, or even what those tactics might be in the first place.

Preparation for employer counter-organizing is best gained through time-intensive coaching and practice. Such training is inconsistent with the profit-oriented, corner-cutting ethos of Silicon Valley. While startup founders geared towards labor organizing may seek to depart from such a mindset, can we expect their investors to do the same? That is asking a lot. Ultimately, organizing is about gaining voice, something that risks being eclipsed by an app alone.

Union organizing is therefore necessarily antagonistic. This does not mean workers have to hate their work, or that they can’t have cordial relationships with their managers and the coworkers they disagree with. It means that in a capitalist system, those who live to own have structural incentives to squeeze those who live to work.

Strong, militant worker organizing is incompatible with the logic of a for-profit tech platform because strong unions curtail the Silicon Valley prerogatives that concentrate wealth among fewer and fewer while exploiting the working class.

This leads us to ask: If those investing in labor app start-ups believe their model of worker organizing will build a worker movement that can pose a genuine challenge to capital, why would they invest in them at all?

The good news is that other organizations that are not tasked with turning a profit are also building platforms that leverage new technologies and organizing methods to help workers unite and win the treatment that they deserve.

That’s what we’re doing here at EWOC. We are hundreds of volunteer labor organizers and activists, supported by staff who are funded exclusively by donations and small grants. We have the backing of militant unions and mass political organizations, including the UE and the DSA.

We provide resources and training that workers can use to, as Martin Luther King Jr. said, make their employers “say yes, even when they want to say no.” We are doing this based exclusively on an ideological commitment to empowering workers, and we do not answer to the authority of investors.

At EWOC, we’ve created an innovative distributed digital organizing model—introducing tools to labor organizing that have helped us reach thousands of workers in need, nurture a new generation of worker-leaders, and spread awareness of the value of collective action far and wide. We have developed a sophisticated intake process that allows us to connect workers with experienced organizers and valuable resources. These include teams that specialize in communications, training, data administration, political education, and fundraising.

We also provide a six-part training series that has taught hundreds of workers the ins and outs of organizing, all while developing a worker-activist network of mutual support. And we do all this while maintaining a strong track-record of winning worker campaigns.
The model at EWOC will always be worker-first. We invite you to get connected to our resources, and learn from our labor organizers about how you can win power and respect at work for you and your co-workers.

Right now, companies are allowed to hold captive audience meetings, which are mandatory meetings with workers to spread anti-union misinformation. If the PRO Act passes on September 27th, that won’t be legal anymore.

The power of the strike ✊ — Emergency Workplace Organizing Committee 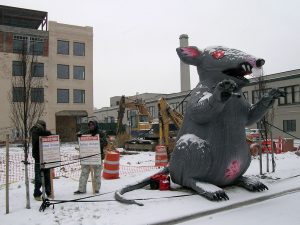 Workplace leaders can form an organizing committee to support and educate each other as they help workers make cohesive demands and a plan to win.