How Does EWOC Work?

EWOC has grown over the past year and now has two staff coordinators, and over 1,000 volunteers have been involved, with hundreds of them likely to be active at any one time. Roles include organizing, research, media, communications, training, data administration, political education, and fundraising.

Workers contact EWOC by filling out a form on the website. An intake organizer then reaches out to them for basic information about their workplace and issues. If the worker wants to move forward, they are assigned an advanced organizer to develop an organizing plan together for as long as they want to continue.

EWOC has also developed a six-session weekly training program that workers are encouraged to take. It has organizing materials on its website, such as videos, organizing basics, and a training manual. It also holds panel discussions where workers talk about their campaigns and the concept of “rank-and-file unionism.”

There is also a training program for organizers to learn how to assist EWOC internally. Some of the workers who contact EWOC will run their campaign, go through the training, and then become an EWOC volunteer organizer.

EWOC is also experimenting with helping workers form networks at large companies with multiple locations, like retail chains. That’s an incredible challenge, since we need to coordinate organizing at many locations at the same time and build power with enough workers to move a large employer.

The basic EWOC organizing framework is covered in the training and in our conversations with workers. It shares common features with Labor Notes, McAlevey, IWW, and many other union trainings. But the best training is to actually organize, and workers will learn this as they do it. The organizing follows these steps:

Here’s my experience as an advanced organizer to give a deeper sense of how this works out. I have taken cases with about 70 workers who reached out to EWOC, and I was able to talk with about half of them—the rest never got back to me. Some workers have one conversation and decide they don’t want to continue. Some are about to quit. Some just need a specific question answered or need legal help. Some I never hear back from again. About 20 of the cases became campaigns in the sense that the worker engaged in some organizing activity, which means talking with coworkers and trying to form an organizing committee. Of these, a handful so far have been successful in that the workers won something, usually regarding COVID-19 issues.

Some of the workers will organize for wins and may stop there, or keep organizing over time. Some want to go further and run an election to get official union recognition and a contract. In one of those cases, I discussed those options with them and connected them to a union, where they won their election and are now in contract bargaining.

Overall, after over a year of operation over 2,700 workers have reached out to EWOC, and over 600 campaigns of some kind have launched. There have been about 40 successful campaigns which have won improved conditions so far, involving thousands of impacted workers. On the EWOC training program, 891 people have attended at least one training, and 245 have graduated after attending the whole series.

The industries that EWOC has interacted with the most include fast food, grocery, retail, higher education, and health care, sectors which largely remained open with essential workers during the pandemic.

One main lesson here is that we have to be honest about how hard this is. A pretty low percentage of everyone that contacts EWOC wins a campaign because some workers lose interest, organizing is really challenging, and we need to get better.

A major bottleneck in these campaigns is the formation of an organizing committee. Sometimes there is one activist in a workplace that wants to do something, but they can’t find anyone to work with them. Issues of feeling hopeless that things can change, or fear of getting fired are widespread, and admittedly, not every worker that we deal with is a leader or good enough organizer yet (and perhaps I’m not a good enough mentor yet). I suspect that if an organizing committee can form, there’s a really good chance of winning improvements, and we’re collecting the data on these campaigns to test that theory.

Also, it’s difficult for many folks to imagine being able to win with collective action. Part of this project is to help them envision that possibility.  Organizing together in a structured way builds the collective confidence that leads to making demands and winning improvements. It’s also important to share the sense that organizing is something most people can do and get better at. There are definite skills needed, and experience is very helpful, but organizing can be taught, practiced, learned and improved. As an organizing mentor with over 20 years in the labor movement, I’m always learning from every campaign.

In my conversations with workers, I try to offer advice and assistance, be honest about the risks and what can be won, and teach the organizing framework. But the campaign timing and activity is all up to them. These campaigns continue as long as the workers want them to and end when they want them to stop.

Even after wins, it’s an ongoing challenge to keep the workplace “organized” over time with worker turnover. And there’s the hope that trained workers will bring an organizing philosophy to future workplaces, training other workers and organizing there. It’s likely that spreading this organizing knowledge widely will contribute to victories later on.The overall idea is that these campaigns should be run by workers with EWOC assistance. The organizing is based on direct action in the workplace, but other campaign elements can be added as well, such as online petitions, protests outside the workplace, getting media attention, and so on. And this project sees itself on the political left, agreeing with UE’s “Them and Us Unionism” philosophy.  In part three, I’ll discuss how the EWOC model suggests a way for unions to reach many more workers with organizing training and campaign assistance.

Eric Dirnbach is a labor movement researcher based in New York City and a volunteer organizer with EWOC. 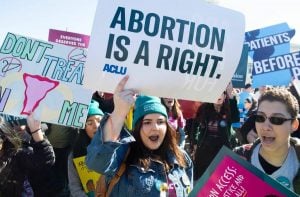