Signs of a New Direction at the NLRB

Ohr’s document deals primarily with Section 7 of the NLRA, the oft-quoted passage protecting an employee’s right to collective bargaining and concerted activity. The phrase “vigorous enforcement” suggests a drastic change in the NLRB’s direction, and an excerpt from the first page sums up the pro-worker ethos of the memo: “Eighty-four years ago, the Supreme Court upheld the constitutionality of the NLRA, guaranteeing workers the fundamental right to self-organize at the workplace.”

Ohr replaced Peter Robb in January after he was sacked by President Biden, which gave Robb the shameful distinction of being the first NLRB general counsel in history to be fired. Many labor leaders took this as a sign that the new administration was stepping up to the plate, and Ohr validated that perception in February when he rescinded several Trump-era memorandums that violated the NLRB’s basic obligation “to protect the exercise by workers of their full freedom of association.” Ohr’s actions offer some hope for organized labor that the federal government will play a more active role in defending workers’ rights and bolstering the NLRB, an agency that has been on a downward swing for some time.

If the same memo had been published a year before, labor reporters might have thought someone was planning an early April Fools’ Day prank. Former General Counsel Peter Robb, appointed by President Trump in 2017, was a pro-employer attorney who routinely took an anti-worker stance, concurring with Uber that its drivers were contractors and not employees, trying to ban the picketer-adored inflatable rat, and even attempting to bust his own union.

The inefficiency of the NLRB over the last forty years is no secret to the labor movement. The agency is notoriously fickle due to its five-member board being appointed by the President and confirmed by the Senate, which makes board appointments a partisan battleground. Case in point, the current Republican-controlled board hasn’t had all of its seats filled since 2018, and it won’t be until December 2021 that the board could be under solid Democratic control.

The number of union elections overseen by the NLRB has also been on a steady decline since 1980. Ever since Ronald Reagan gave businesses the green light to crush worker opposition with his firing of air-traffic controllers, (aided, perhaps unsurprisingly, by the recently discharged Robb) legal strategies developed by employers in the last half-century have drowned the agency in a bureaucratic swamp. This form of legal swashbuckling often lasts years, even after workers win an election, and makes the interpretation of NLRA laws as important as the laws themselves. With businesses often having a greater cash reserve, they began to win many of these drawn-out legal battles.

But perhaps the darkest hour was just before the dawn. President Biden recently made clear why we need to support unions, extending a hand towards organized labor in a manner not seen in over 50 years. His statement reflects how significant the turnaround at the NLRB has been in just over two months, and how the agency is taking a more aggressive stance than it did under the Obama administration.

Ohr’s appointment is temporary, and he’ll only serve as general counsel until Biden’s official appointee, Jennifer Abruzzo, is confirmed by the Senate. But his memo has seemingly already placed labor law jurisprudence back on the side of workers, stating that “constraints and limitations placed on employees engaging in concerted activities (…) serve to effectively undermine the declared policy of the United States.”

Ohr’s memo deals specifically with legal precedents, clearing the way for union victories in the courtroom. The general counsel cites case after case as just cause for protecting a worker’s right to discuss almost anything related to their workplace. This protection extends not only to discussions related to union organizing, but also to health and safety issues, racial discrimination, or even events outside the workplace which could have an impact on their job. Ohr goes so far as to repudiate cases that were previously used to limit the rights of workers, effectively dismantling many of the legal avenues available to employers.

In a nutshell, the NLRB seems to be righting its own ship, and it’s up to worker organizations to test its capacity. The NLRB-conducted Amazon union election in Alabama is only one of hundreds that will be held in the next few months, and hopefully that number will increase in the coming years as workers see their chances for success grow. The need for serious reform is still clear, but the actions of the NLRB have signaled to workers who wish to organize that at least some of the cards are no longer stacked against them.

If you want to learn how to organize your own workplace, talk with an organizer today!

PrevPreviousWhat Is Taft-Hartley and Why Is It Bad?
NextIn Case of Emergency, Fight Back! When We Fight, We Win!Next
Talk with an Organizer 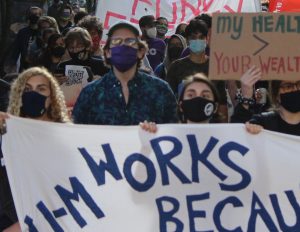 Upcoming Events 🗓 The eighth series of the Workplace Organizer Training Series, starts this Wednesday, August 10th! In 90 minute sessions over four weeks, we 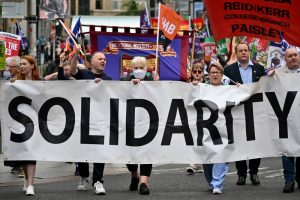 Solidarity and strength, even in hard times

Upcoming Events 🗓 Join us for the eighth series of the Workplace Organizer Training Series, starting on Wednesday, August 10th, and running weekly on Wednesdays