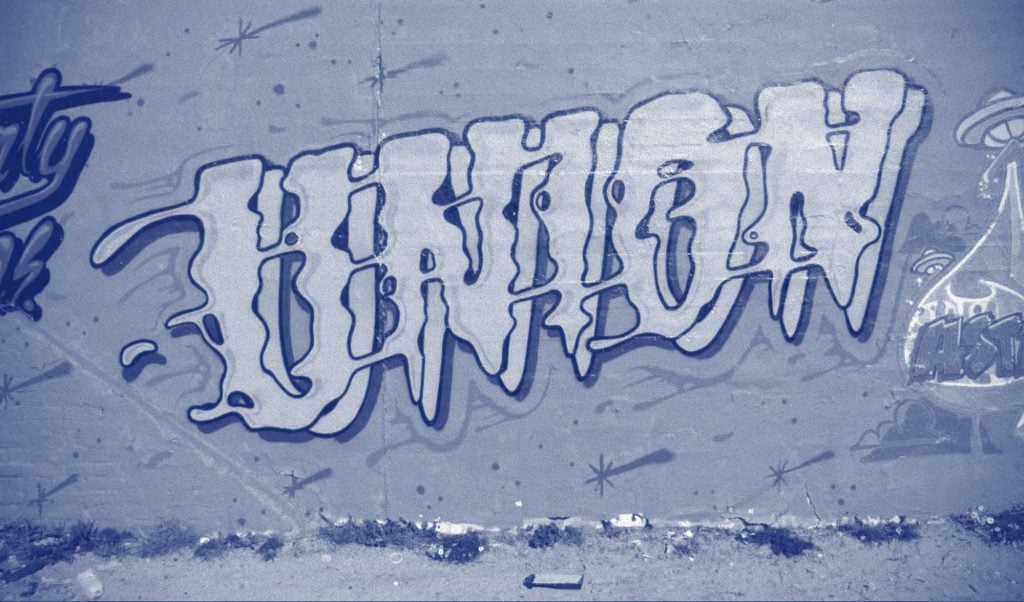 Here are some common union words and phrases.

The amount a worker pays to the union when they are in a private sector workplace covered by a collective bargaining agreement, but they are not a union member. This only applies in non-”Right to Work” states.

A tactic used by workers and consumers to pressure employers through a mass refusal to purchase their products or otherwise patronize the business.

A negative term indicating that a union has a top-down, staff-driven approach that prioritizes labor-management partnerships, minimizing conflict with employers and lacks adequate member participation and democracy.

A method for workers to organize a union in which a majority of employees in a bargaining unit sign union authorization cards, and that is used as the basis for employer recognition of the union.

Organizing and union activity is directed by the members within a left, anti-capitalist political framework. Similar to “rank-and-file unionism,” but with an emphasis on workers organizing as part of the working class, whose interests are necessarily opposed to those of management because of how capitalism structures businesses and government to incentivize exploiting workers. The UE calls this Them and Us Unionism.

The process whereby a union and employer negotiate a contract.

A written contract between a union and an employer that covers the wages, benefits, working conditions, and other issues related to employment.

The group of workers from one or more workplaces that organize together and bargain a contract with the employer.

The rights, protected by the National Labor Relations Act, of two or more employees to act in concert to form, join, or assist labor organizations in order to affect their wages, benefits and working conditions.

A union organizing strategy that prioritizes obtaining a negotiated collective bargaining agreement with the employer.

The rights and responsibilities of a union to be the sole representative for a bargaining unit of workers in negotiations with an employer.

An employer action that seeks to force the terms of a settlement by refusing to allow union employees to work or by shutting down operations.

Only the members of the union bargain with the employer and receive the benefits won through those negotiations. While used in the pre-NLRA era, the NLRB currently does not require employers to bargain with workers who don’t have official recognition as the exclusive bargaining representative.

An organizing strategy where the union officially only represents workers who have signed up as members, though the union will typically fight for improvements for all the workers.

A group of workers who are at the forefront of leading their union into worker-led struggles to build power on the shop floor. “Militant minorities” can exist within unions that have contracts and unions that do not.

Another name for pre-majority unionism, where the union has organized less than a majority of the workers at a workplace or employer.

National Labor Relations Act, the federal labor law passed in 1935 that outlines the rights of most private sector workers to organize unions and engage in collective bargaining.

Workers fight for improvements at work without necessarily having a contract.

The union is open to all workers at any workplace who want to join, even if they are the only one at their workplace and there is no organizing campaign ongoing.

Workers in a given workplace organize for better workplace conditions even though they do not have official recognition or a union contract. Usually less than a majority of the workers at an employer are involved, even though most unions aspire to achieve majorities or supermajorities.

Organizing and union activity that is directed by the “rank and file” workers of a union, meaning the workers themselves and not the elected leadership or hired staff.

An election overseen by the NLRB whereby the workers in a bargaining unit choose whether or not to officially form a recognized and certified union.

Refers to state laws that prohibit any agreement between a union and an employer that mandates that workers in a bargaining unit must pay union dues or agency fees. This means that non members will pay nothing but still get all the benefits of the union’s work, including the contract.

The rights outlined in the NLRA Section 7 that protect concerted activity of workers.

A form of organizing used most by the Industrial Workers of the world (IWW) that prioritizes rank-and-file worker direct action to improve wages, benefits and working conditions, and usually does not seek official union recognition or a collective bargaining agreement.

The concerted withholding of labor by workers from their employer until certain terms and conditions are met.

Conduct prohibited by the NLRA. For example, when an employer retaliates against union supporters or interrogates workers about their support for the union.

A form of organizing where all the workers at an employer are eligible to be involved in the union. “Wall-to-wall” unions generally have to be non-contractual unions by necessity because if they file for a union election they are sometimes forced to abide by “professional/non-professional” job category distinctions as per the NLRB. That said, if every different job classification at a given employer has official recognition and a contract with the employer, but all are affiliated with the same national or international union, this is often called “wall-to-wall representation” even though the workers are technically in different bargaining units.

A strike undertaken by union workers without official union authorization.

An organization of workers in the same industry or geographic area that works to improve wages, benefits and working conditions.

An organization of workers in the same industry or geographic area that works to improve wages, benefits and working conditions, and also provides services to workers such as assistance with wage theft or immigration cases.