Our union was started by a handful of the youngest and lowest-paid employees, on a napkin held down by bowls of rice at our local Chinese restaurant.

At our small nonprofit, organizing movements have existed for as long as the doors have been open. Networks of mutual care, support, and advocacy — built mostly by underpaid women of color — have sustained and fueled the organization, as is the case in many nonprofits.

To me, unionizing was a step in shifting the responsibility of maintaining those networks from individual workers to the organization as a whole. It was a way to protect the workers who had shown me the support we felt was missing from the organization.

Back at the Chinese restaurant, I told my coworkers about a tweet I had seen directing workers to contact an organization called the Emergency Workplace Organizing Committee to learn about unionizing.

We had talked about unionizing, but we didn’t have a clue where to even begin. I had watched the first couple of videos of the EWOC training series the night before. The trainings were like pieces of a puzzle: we didn’t know what the full picture was going to look like, but we could start putting it together. I learned that one of the first steps to unionizing was creating a list of your coworkers and learning their grievances and relationships with other coworkers.

So, on a napkin, we wrote down everyone we knew and everything we knew about them and resolved to learn more.

Then we contacted EWOC.

Our next step was to reach out to form our organizing committee. We contacted coworkers who were trusted friends and asked them for help.

At first, they were doubtful that we could be successful. They knew what we didn’t: that organizing is deeply exhausting and often invites retaliation. Still, they gave their full support. I think here, our naiveté was our biggest strength. We believed we could make this happen because we didn’t know how much work it would take.

The first time I felt like part of an organizing committee, and not just a group of friends, was on our first call with our EWOC organizer. It was the first time we all committed to a long-term plan. More important than that, however, was committing to a series of small, achievable steps with the guidance and accountability of EWOC.

Our organizer was a local activist, familiar with our work. It was significant to us to have the support of a community member who understood our ties to our community. As a small nonprofit, we had fostered tight-knit relationships not just with each other but with the community around us.

As we organized, we faced anti-union rhetoric that painted the union as an “outsider,” a separate party that couldn’t understand us like we understood each other and our community. Because of this, it also proved crucial that we involved community members in our organizing: it showed for itself that the union was simply an extension of the same, tight-knit community we were so proud of, which we, in fact, are creating and sustaining ourselves.

As we worked with EWOC, we continued to follow the video training series. We learned the importance of knowing our workplace and our coworkers. In a workplace of around 30 people, we already knew each other pretty well. But we learned that relationship building is an ongoing and never-ending process.

We tried to get to know everyone as people, not just as coworkers. What I saw was that it was often easier to convince someone to come to a meeting by being their friend and letting them know that they were significant and wanted there than by appealing to any of their grievances or speaking about the bigger cause.

One thing that I believe was important was to envision a role in our movement for someone before bringing them in, no matter how big or small.

It was difficult to find a union willing to represent us because we were such a small organization. But EWOC connected us to a union, which is something I don’t think we could have been able to do on our own.

Our first call with our union representative was the first of many wins that we achieved with EWOC. Having gone through the EWOC training series before this call helped us make the most of it, and kickstarted our journey to recognition. The union rep expected to walk us through workplace mapping and initial organizing conversations with our coworkers, but we joined the call with a complete map of our coworkers, their relationships with each other, their roles and grievances, and their likelihood of being pro-union. We were prepared to discuss the key players and issues in our organization.

We were able to take advantage of those initial conversations and introduce our workplace to the union, rather than introducing the union to our workplace.

This was crucial because organizing in small nonprofits, where workers and management often have deep personal relationships, is very different from organizing in bigger, for-profit industries.

One of the biggest challenges we faced was getting support from workers who ideologically believed unions were necessary but did not see the need for one at our workplace. As a response to this, we tried to show our coworkers that there was majority support for the union, widely shared grievances within our organization, and clear, concrete ways that the union could alleviate these grievances.

The journey to unionization was extremely difficult and extremely exhausting. It felt like we were always on the clock. It was hard to find moments to breathe, to celebrate.

But there was too much to gain to give up. Only a few months after our first meeting at the Chinese restaurant, our union won recognition with over 90% of votes in favor.

Today, we continue our fight for our first contract.

I have learned that in order to provide better services to our clients and our community, we have to engage in radical care for ourselves. This fight has deepened our commitment to each other and to our work. It was an absolute honor to watch some of the people I admire most use the same passion and care they use to fight for our community to advocate for each other, and, most importantly, for themselves.

Our motto is “la lucha nos une”: our struggle unites us.

PrevPreviousWeekly Update: Take hold of this moment
Talk with an Organizer 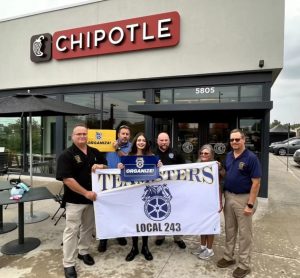 Recently won union recognition or in the process of organizing your union now? Want to learn the fundamentals of what to do next? Come to 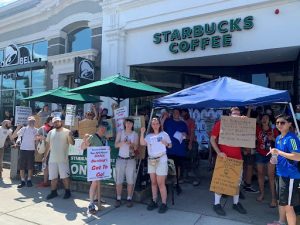 Weekly Update: My work has value and we will win

Upcoming Events 🗓 Recently won union recognition or in the process of organizing your union now? Want to learn the fundamentals of what to do 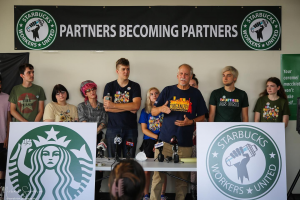 In Boston’s Allston neighborhood, Kylah Clay, a 24-year-old barista and law student, decided to reach out to Workers United about unionizing her store last October. We spoke with Kylah as her store’s election was in-progress. When the ballots were counted, she and her coworkers had won their union in an unanimous vote.