Is there actually a labor shortage?

The problems faced by low-wage workers existed long before the pandemic. Today’s so-called “labor shortage” brings that to the forefront.

If you’re paying attention right now, then you know that American businesses are struggling to hire and retain workers. Even after having their covid-era unemployment benefits cut off at the end of the summer, many low-wage workers aren’t returning to the jobs they held before the pandemic, and in fact, Americans are quitting their jobs at record rates. One of the most prominent explanations that’s emerged for these events has been a “labor shortage,” but as EWOC’s recent political education panel has explained, this doesn’t tell the whole story.

At last week’s event, “Help Wanted: What Does the ‘Labor Shortage’ Mean for Working People?”, we heard from three voices across the labor movement: Hadas Thier, activist, journalist, and author of A People’s Guide to Capitalism: An Introduction to Marxist Economics; Emilio Enriquez, organizer with the Restaurant Organizing Project; and Rebecca Garelli, teacher and organizer with Arizona Educators United (AEU).

The speakers were quick to agree on one thing: what some pundits are calling a “labor shortage” fails to capture the underlying issues that have driven workers out of their pre-pandemic jobs, and are keeping them from returning. Thier called it “a shortage of workers willing to work for sub-living wages [under] grueling conditions.” Enriquez agreed, characterizing this moment as “a wage shortage, a benefits shortage.”

Calling it a “labor shortage” implies that there aren’t enough people to do the work, which isn’t true. In addition to being misleading, this label stops us from discussing and addressing the very real challenges faced by workers across this country, challenges that have only intensified since the pandemic began. It’s time to get real about what those challenges and pressures really are, and how they’re shaping workers’ decisions right now.

Many jobs were bad before the pandemic.

Before anyone was familiar with the acronym COVID-19, the American economy was relying on low-wage labor performed by people who were facing decades of wage stagnation, rising debt, the erosion of benefits, and long hours. As Rebecca Garelli pointed out, education funding has been gutted ever since the recession, leading to poor compensation for teachers and bad working conditions in public schools.

Pressed into preparing their students for ever-more-frequent standardized testing, teachers have felt forced to treat kids as statistics instead of individuals, said Garelli, and teacher morale has suffered as a result. Garelli cited the “aggressive and intentional agenda to destroy public schools” as a corrosive force that was well underway before the pandemic, resulting in notoriously low pay for teachers. “The payscale is low because it’s majority women, and women’s work and care work in this country is not valued.”

For his part, after seven years of working at restaurants, Emilio Enriquez saw pervasive problems in an industry that relies on a severe power imbalance to function and is plagued by low pay, wage theft, a lack of benefits, and a system of tipping that disproportionately rips off people of color. As he put it, restaurants have “almost proudly” exploited undocumented labor, so that undocumented workers live in fear of being fired or reported to immigration authorities. He cited “the glorification of the badass chef” as contributing to a culture of abuse and harassment, and he emphasized that he sees these problems everywhere he looks: “It stops being an anecdote when every restaurant worker you know has a similar story.” With conditions like these, it’s clear that low pay, toxic work environments, and overwork were already grinding people down before covid came along.

If low-wage workers were under any illusions that they were valued or protected before the pandemic, covid came along and blew those illusions to dust. While upper management could perform their work from the safety of home, frontline workers had to continue serving coffees and sweeping floors for the general public, often without any safety protections, PPE, or paid sick leave. As Thier put it, workers were “forced to choose between risking their lives and their livelihoods.” At one point during the height of the crisis, she added, over 1 million workers were laid off every day.  As job losses mounted and employers refused to grant basic safety protections, workers were branded as “essential” while being treated as disposable, and they were all too aware of the irony. “We know that what’s really meant by ‘essential workers’ is these workers are essential to making profits,” said Thier.

Both the problems that pre-dated covid and the problems caused by the virus have not gone away, the panelists argued. Emilio Enriquez said that “nothing fundamentally has changed for [the restaurant] industry, so people aren’t coming back.” What’s more, workers are getting tipped less and harassed more for trying to enforce covid safety protocols. Rebecca Garelli contended that things have also gotten worse for Arizona teachers, due to a lack of PPE and mask mandates, ballooning class sizes combined with a lack of substitute teachers, and persistently meager wages and benefits.

There’s another reason low-wage workers aren’t coming back: many of them died. As Enriquez somberly pointed out, over 700,000 Americans have died of covid, and the job with the highest mortality increase has been line cooks, at 60%. So it’s hardly a coincidence that the workers most devastated by the virus aren’t racing to return to the jobs they held before the pandemic.

Driven by a mixture of hope and despair, workers are leveraging this shift in power to create real change.

The despair felt by workers right now is that many of these jobs are worse than ever. But the hope comes from a combination of factors. Thanks to pandemic unemployment benefits and stimulus payments, workers have been able to save money and reduce debt, giving them a sense of possibility they simply didn’t have before. Many have a financial cushion for the first time in their lives, which provides an opportunity to hold out for better, fairer jobs or a change of career.

All over the nation, workers are using their leverage to push for change, giving rise to a historic strike wave that’s roiling industries as diverse as healthcare, construction, consumer packaged goods, and entertainment. While there is symbolic power in walking away from shitty jobs, the way to create long-term change is to come together to improve these jobs, and many non-unionized workers are mobilizing for the first time. This is a cause for hope, and a reason to join the fight. We think Enriquez put it best when he said, “Don’t quit your job. Your next boss is going to suck, too.”

Thinking about quitting your job, or better yet, trying to improve it? EWOC can help you organize your workplace to win real changes from your employer, from better wages and benefits to more sustainable scheduling. 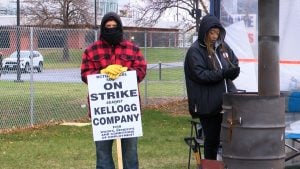 There’s always work to be done.

Merch Alert! Want to start a conversation on the street, on the subway, or in your local coffee shop? You can now rep EWOC wherever 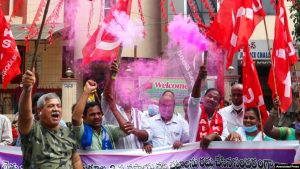 What was “unprecedented” is now front and center

We launched in March 2020 to support workers organizing for COVID protections. It’s been an incredible year and a half of organizing. But we need 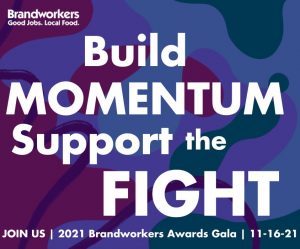 One thing is clear: labor is the moment

Upcoming Events 🗓 We’ve had a big year! Join us for our end-of-year general meeting, December 15 at 8:00PM EST, as we discuss our organizing