How the Ruling Class Utilized ‘Whiteness’ to Divide the Working Class.

The year is 1741. New York City’s white aristocratic population is gripped with terror as a series of fires spread across lower Manhattan. Rumors of a conspiracy between New York’s slaves, Black freedmen, and white indentured servants run rampant.

Mary Burton, a 16-year-old Irish indentured servant, is captured and testifies against the others, confirming the ruling class’s worst fears: an organized plot to burn the city and kill its white inhabitants. Hundreds of enslaved Black men, freedmen, and poor whites are rounded up.

The trials are swift and brutal: 17 Black men, 2 white men, and 2 white women are sentenced to death and promptly hanged. Another Thirteen Black men are burned at the stake. Two men suspected of leading the plot, an enslaved Black man by the name Caesar, and a white cobble named John Hughson, are hanged as well, and their corpses are left to rot in public.

While historians disagree on how organized the arsons were– let alone on whether there was any plot to begin with– what we do know is that the mere notion of “lower-class groups”: enslaved Black Americans and poor whites socializing together was a dangerous prospect to America’s capitalist class.

The 1741 proto-working class rebellion taught the ruling class a valuable lesson that they never forgot. Over time, extensive measures have been enacted to ensure that multiracial revolts, like the Slave Insurrection of 1741, would never happen again.

Prior to 1800, the right to vote was limited to white male property owners, placing almost all political power in the hands of the wealthy few.

However, during Andrew Jackson’s presidency, the sociopolitical climate was completely transformed. With the introduction of universal white male suffrage, Jackson ushered in what historians refer to as the “Age of the Common Man.”

By the 1840s, more than 90 percent of white males of every class could vote in the United States, and thus the scourge of collaborative working-class movements was successfully smothered. Suddenly, white men regardless of their economic status could wield political power by virtue of their whiteness. This effectively mitigated multiracial working-class solidarity for centuries.

A phrase popular amongst poor whites came to encapsulate this phenomenon: “I might be poor, but at least I ain’t a nigger.” Under this new sociopolitical context, signifiers of Black freedom, wealth, or affluence became affronts to whiteness. During the American Civil War, poor whites fought and died in the hundreds of thousands in the ranks of the Confederacy to defend the economic interests of an aristocratic plantation class and, as many saw it, protect their own social status as white men.

“This morning we are in about seven or eight miles of about 30,000 yankeeys we have about 15,000 men whear reddy fur them and if tha dare come eny futher we will let them hear from us we will make them know that a white man is better than a nigger.” – Jonas Bradshaw, Company G, 38th NC Infantry

In the postbellum era, aspirational working-class European immigrant groups, seeking prosperity and acceptance into the ruling Anglo-Saxon culture, likewise distanced themselves from Black Americans. Irish, Italian, and Polish immigrants, who were not traditionally considered white by the Anglo-Saxon ruling class, could ascend the racial hierarchy to whiteness through the repression and subjugation of Black and Asian Americans, many of whom shared the hardships of worker exploitation under capitalism.

This racial hatred came to a head in the following century, resulting in some of the worst racial violence in American history. Wherever all-Black towns emerged—in Rosewood, Fla.; Tulsa, Okla.; or Knoxville, Tenn.—poor whites used existing fears of Black masculinity to “reclaim” their status by liquidating what relatively marginal economic gains Black communities made. Bands of thousands of white workers armed themselves and targeted Black business districts and cultural centers.

In what was called the Red Summer of 1919, white supremacist violence and racial riots occurred in more than three dozen cities across the United States. Approximately 25 riots and 97 lynchings were recorded over the course of July.

In Elaine, Arkansas, Black sharecroppers, seeking fairer wages, formally joined the Progressive Farmers and Household Union of America (PFHUA), a union for African-American tenant farmers and sharecroppers. Fearing the implications of Black labor organizing, a group of local white men, many of whom were members of local law enforcement, surrounded the small church where the Black sharecroppers met and fired shots inside. The sharecroppers returned fire in self-defense, killing one white man. In response, local white vigilantes began a three-day-long massacre that killed over 200 Black men, women, and children.

A century later, during the Second World War, white workers once more betrayed their Black comrades. Riots similar to those of 1919 emerged in Detroit, Michigan; Beaumont, Texas; Mobile, Ala.; and Los Angeles, Calif. In June 1943, several factories faced slowdowns as white workers, who had promised a “no-strike pledge” to the Roosevelt administration during wartime, halted production to protest the hiring and promotion of Black co-workers. Many simply refused to work alongside Black workers altogether.

Detroit, known at the time as the “Arsenal of Democracy” for its industrial prosperity and central role in producing material for the war effort, came to reflect the role of white supremacy in the racial division of the working class. Following America’s entry into the Second World War, workers from across the country, including hundreds of thousands of southern Black Americans, flocked to industrial cities hoping to find well-paying defense industry jobs.

The influx of Black Americans to Detroit exacerbated existing racial tensions and housing competition which once again culminated in violent riots. White workers, traveling in armed groups, targeted black neighborhoods in and around Detroit. While the Allies fought the fascist Third Reich overseas, at home, white supremacy and racial conflict, galvanized by the ruling class, prevailed. After three days of violence, 34 people were killed, 25 of whom were Black Americans.

Decades later, in 1982, two white auto workers, embittered by the 1980s auto recession, committed one of the most infamous anti-Asian hate crimes in American history when they murdered Vincent Chin, a Chinese-American man, with a baseball bat. Mass layoffs from auto manufacturers trying to maintain a profit, led many workers to blame Japanese auto manufacturers and by extension, Asian Americans, for the recession. Detroit, the auto manufacturing center of America, thus became a hotbed for anti-Asian sentiment in response to the rising presence of Japanese imports in US markets. On the night of the killing, Chin and the two auto workers were heard arguing. One of the workers racially profiled Chin, mistaking him for a Japanese man, and blaming him for his hardships yelling: “it’s because of little motherfuckers like you that we’re out of work.”

The Future of the Multiracial Working Class:

The racial stratification of workers has remained a blot on American society and an obstacle in the struggle of the working class. It’s important to note that Institutional labor has never been immune: the lack of representation for Black workers from major organizations such as the AFL-CIO persisted well into the Civil Rights movement and beyond.

This isn’t to say that Black and white workers haven’t sustained successful collaborative movements. The Louisville general strike of 1877, the establishment of the American Negro Labor Congress, and the Black presence in leftist organizations like the IWW and CPUSA offer examples of cross-racial collaboration, but those are largely the exceptions.

In our current political climate, one cannot ignore the overwhelming presence of white, blue-collar workers amongst the GOP voter base. Far-right, ultra-nationalists like Tucker Carlson and Donald Trump, who often wield populist rhetoric despite being staunch members of the ruling class, have effectively weaponized false consciousness. What we have seen over the course of the Trump presidency, as a result, is the revitalization and perpetuation of white christian-nationalism above working class interests.

The manipulation of workers by white oligarchs has served its purpose. Working-class unity has historically been determined by the willingness of white workers to collaborate with their non-white counterparts. The solution lies in our hands, however, the question remains: are white workers willing to shed the privilege of whiteness to benefit the working-class struggle? The answer to that question will determine the future of effective, transformative worker solidarity and the fate of the capitalist status quo.

PrevPreviousWorking-Class Hero of the Week: Angelo Herndon
NextHow to Honor the Picket Line. An EWOC Guide to SolidarityNext
Talk with an Organizer

How to Honor the Picket Line. An EWOC Guide to Solidarity

2022 saw an explosion of union organizing and collective action leading to some significant wins, namely at Amazon, Trader Joe’s, all 10 UC campuses, REI,

During the height of the Great Depression, leftist organizer, Angelo Herndon united Black and white Workers in the Jim Crow South. 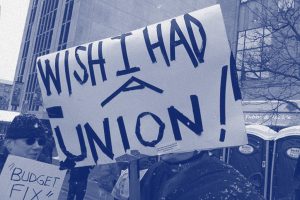 5 Signs Your Company Is Trying to Bust Your Union

This list of common tactics will ensure you and your coworkers are well-prepared to endure anything your boss throws at you when it comes time to organize.