Grocery and Food Service Worker Wins Across the Country

The battle for workers’ rights continues! Check out these recent wins.

After months of pressure and rallying from labor unions and worker advocacy groups, including the CWA, Workers United, and ALIGN, New York State passed the New York Health and Essential Rights (NY HERO) Act. The act requires businesses to have enforceable safety standards to prevent the further spread of coronavirus and future infectious diseases in the workplace, a critical issue for frontline grocery and food service workers.

Teamsters Get Results from California to Maine

Grocery drivers for Shaw’s Supermarket in Maine have concluded their strike, with both sides agreeing to come back to the bargaining table. The drivers, along with the mechanics who service the delivery trucks, are represented by Teamsters Local 340. The Teamsters, who represent tens of thousands of warehouse and delivery drivers across the country at locations such as Krogers and Albertsons, recently reached a new deal covering over 4,000 workers in the Southern California area.

After an outcry by local unions with the UFCW, RWDSU, SEIU, and a conglomeration of workers rights groups, states such as New Jersey have agreed to continue their mask mandates to protect their essential workers and retail employees for as long as needed. Groups are continuing to pressure other states around the country to follow New Jersey’s lead.

UFCW Local 342 helped organize 60 cheese workers at Formaggio in Hurleyville, New York. UFCW Local 1439 at Twin City Foods won their union election by a landslide and are moving into bargaining.

Meanwhile, 4,000 members of UFCW Local 304A at Smithfield Meatpacking Facilities in  Sioux Falls, South Dakota, voted to reject their new union contract. They’re putting the pressure on their employer to come up with a more worker-friendly proposal, especially in the wake of a disastrous year at the plant, which saw four workers die from COVID-19.

Workers represented by UFCW Local 1428 organized a food giveaway in California for families in need, while UFCW Local 2 in Kansas is helping to boost vaccination numbers, showing the cross-sectional benefits unions offer their members.

Workers at Imperfect Foods have Unionized! A worker at the company cited “12- to 14-hour shifts, loading vans with 30- to 40-pound boxes of food, and unloading them 100 to 200 times per day,” among the reasons they decided to organize.

Let’s Keep Up the Winning Streak

Read more about Jeff Bezos and Amazon, or about recent wins for grocery and food service workers here.

PrevPrevious7 Things Amazon Has Taken Away from Whole Foods Workers
Next‘We Took Care of Each Other’: A Maritime Union’s Hidden History of Gay-Straight and Interracial SolidarityNext
Talk with an Organizer 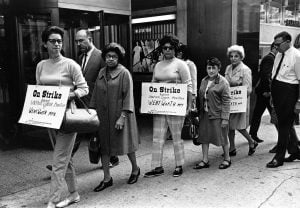