7 Ways Workers Can Fight Omicron in Their Workplace

Hospitals and schools are struggling to stay open under the weight of COVID-19 as the omicron variant sends cases through the roof. The National Guard is even being activated. However, the government response has been to encourage infected workers to stay home for an inadequate period of time. The government’s goal is to normalize dangerous working conditions and mass death.

Frontline workers are not taking this indifference lying down, however. At a recent panel hosted by the Emergency Workplace Organizing Committee (EWOC), some nurses and teachers revealed how they’re fighting back. The panel featured Jia Lee, a special education teacher in Manhattan; Sean Petty, an emergency room nurse at Jacobi Medical Center; Elizabeth Lalasz, a nurse at Stroger Hospital in Chicago; and Jackson Potter, a history teacher in Chicago. The event was moderated by Chris Brooks, field director of the NewsGuild of New York.

To win better safety conditions, workers must be prepared to take action in their workplaces. Reaching this point is “essentially an ongoing process of putting into practice the idea that the boss needs us more than we need the boss,” Petty said. “It’s really fundamentally about self-determination and a recognition by us that we are the center, that everything else revolves around us.”

The panel shared the following organizing tips and tactics for building and acting on that confidence. Workers who want to put some of these ideas into practice should contact EWOC for organizing support.

Two panelists, Petty and Lalasz, banded together with some of their co-workers to hold press conferences about their abysmal working conditions. These events can present an opportunity to raise awareness about unsafe workplaces and to bring public pressure to bear on employers to improve safety standards. They also can inspire other workers, both inside and outside the workplace, to take action as well.

At a rally on January 13 attended by several New York City politicians, Petty and other nurses at Jacobi Medical Center in the Bronx highlighted the dual shortage of staff and hospital beds that has stretched the facility to its breaking point. And Lalasz’s union, National Nurses United, staged a national day of action on the same day to demand that the Biden administration “protect nurses and prioritize public health.” The event included a candlelight vigil in Washington, D.C.,

The ultimate way to make the boss listen is to collectively withhold your labor. This usually takes the form of simply walking out, but workers can also refuse to work inside the workplace and simply sit down. Lalasz, a union steward with National Nurses United, said nurses in Chicago hospitals have successfully used this tactic to demand N95 masks.

To use a tactic like a sitdown strike, you first need workers who are ready to take action. This all starts by building a core group of activists who are committed to organizing and convincing their co-workers to assert themselves. Jia Lee, a New York special education teacher, has undertaken this work by helping to cultivate an activist caucus, the Movement of Rank-and-File Educators (MORE), within her larger, sometimes flat-footed union, the United Federation of Teachers (UFT).

The group started small, but they laid a foundation that has served as a springboard for labor actions since the pandemic hit. This shows how organizing work that can be painfully incremental at first can suddenly pay off big-time when the moment is right. It’s about “playing a long-term game, so you’re prepared when these flashpoints happen,” Petty said. Now with omicron and a tight labor market, Petty says we are bearing witness to another flashpoint.

MORE has helped force school shutdowns and the enactment of some important safety measures in the past, Lee said. The caucus was able to do this after launching an organizer training program using resources such as guides from Labor Notes. Now, CORE has members spread across the district. With the omicron wave, these teachers have been launching a range of creative actions across the city, including a recent protest at the Barclays Center in Brooklyn.

It’s important for organizers to hold meetings where all workers can feel comfortable voicing their concerns and ideas, Lee said. This can be done by having a “stack” system where people queue up to express themselves, creating a norm of speaking “to the issue, not the person,” and agreeing to disagree.

“Once we set the norms, people were like, ‘OK, I’ve never spoken up at a union meeting before, but I feel like I’m going to do that,’” she said. These meetings can nurture an understanding of the potential of collective action. “It’s so amazingly powerful when you realize we’re getting together, and we’re going to do shit that’s going to change the conditions for us.”

Design and Demand a Safety Plan

The Chicago Teachers Union (CTU) is a textbook case of what a militant minority can accomplish. Their rank-and-file caucus transformed the union into an organization that commands deep respect in the city.

This explains why the union could force the administration to implement a relatively comprehensive safety plan in early 2021. The plan established a safety committee, school closing metrics, ventilation requirements, and social distancing procedures.

But Mayor Lori Lightfoot later refused to fully implement such measures, even in the face of the omicron surge. In response, CTU recently brought its power to bear once again. Its members have refused to submit to dangerous conditions, and their resistance has grabbed the national spotlight. “The whirlwind of democracy” in CTU that stirred up labor militancy since omicron helped the union secure another agreement after a recent standoff, Potter said.

Ultimately, achieving a more reasonable response to the pandemic will require cross-sector organizing between organized and unorganized workers, panelists said. It will also require building alliances between workers and communities, whether that involves coalition work between parents and teachers, nurses and patients, or workers and customers.

“We need to show that we’re not special snowflakes,” Potter said. “Teachers can’t be the only workers having some protection at work. It’s important to generalize that resistance.”

Indeed, nurses, teachers, and other care workers need to think strategically about how to ratchet up pressure on bosses without rubbing some community members the wrong way, Petty said.

He raised the idea of a “data strike” as one way to pull this off. If workers could short-circuit some of the data systems they interact with, such as those that collect metrics on productivity, that could “freak out our bosses and gain a spotlight, but also continue to help build solidarity,” he said.

“I think that CTU has given us a great model,” Petty added, referring to its community coalition work. “The groundwork that CTU did in building the credibility of their struggle with parents is 100 percent a model in terms of how you have to build the kind of struggles, especially in the public sector, especially when we’re delivering these critical services for poor communities.”

A mass mobilization of unionists, unorganized workers and community members might be what it would take to force humane pandemic-fighting policies from the Biden administration. Such a movement could pressure the government to share the vaccine with other countries and to invoke the Defense Production Act to produce more supply.

Looking for more advice on organizing your workplace? Talk with an EWOC organizer to get resources and support to help you win the changes you want to see at work. 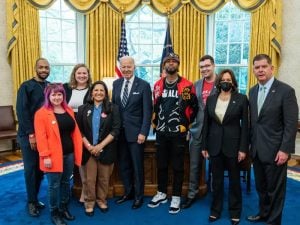